St. Vincent
Team Nevis cycle club traveled to ST. Vincent for a two stage race on the 4th/ 5th of June 2006. First I must say the flight was both frustrating and tiring, not only was it delayed for a long time but the team suffered severely from the inability to hydrate properly until the morning before the race. Nevertheless the team with strong determination decided to push ahead and give it their best shot.
Three hours before the race the athletes began their journey to the race site which took roughly 2 hours drive through very meandering and mountainous terrain. There were 7 different teams from Tortola, St Vincent, Nevis, St Lucia, Grenada, Anguilla and Antigua each team with 5 riders, all sporting their club colors, and Team Nevis cut quite a dash in their B-mobile outfits. With only minutes to spare the athletes began to organize for a hilly and windy 65 mile race.
At the drop of the flag the athletes were off with an immediate burst of speed but team Nevis was not easily shaken and was able to hang on to the fiercest attacks initiated by the leaders. Team Nevis held on strong through the undulating terrain, until about half way through the race when James Weekes began to feel the effects of the lack of proper hydration. This forced him to back off the pace from the group; Keith Jones was also feeling the effects as he also began to back off almost the same time. Amos Bruno and Royston Stevens broke formation earlier in the race, this being Royston’s first race after his serious crash. But Reggie Douglas held on for the team, doing a lot of work to keep up his groups pace and was able to finish in the 11th position in a time of 3hrs 9 mins, followed by Keith and James some minutes later. Chris Ghiorse of Tortola took the top spot in 3hrs flat, followed by a young Tyron Thomas of Grenada and in third place veteran rider Ronnie Bryan of Anguilla. There were many drop outs as a result of the tough hills and fierce pace that this race had but it was good experience with a happy ending as all of Team Nevis finished, they were able to gain valuable race knowledge and to know where their fitness level was compared to the better part of the Caribbean and the OECS.
Race 2 was 20 laps around Kingstown this was a race called a Criterium where if you got lapped you had to pull off the race, and allowed for non OECS riders to compete. From the gun the pace was like 30mph and over this caught some of Team Nevis members off guard and as a result two of them fell prey to being lapped early in the race. Reggie James and Keith was able to hold on for longer but in the eighth lap Keith went under and had to pull off while Reggie and James held on, only one lap later James had to pull off, leaving Reggie to fight solo, but two laps later which was also the 11th lap he also had to pull off. The race was to be dominated by Barry Luces of Trinidad who took first in a time of 1:04:12, second was Tyron Thomas of Grenada, third was Chris Ghiorse of Tortola. 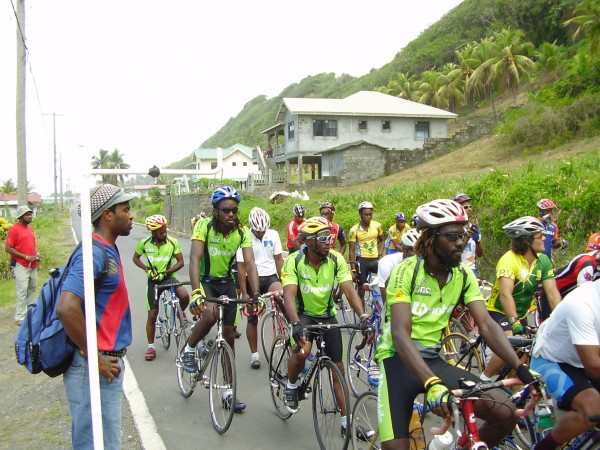